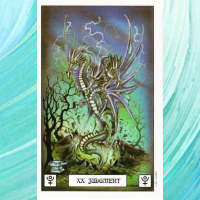 Specifically this is the Dragon Tarot Deck by Peter Pracownik and Terry Donaldson. There are a variety of other dragon decks out there, this is the one I own and use. I find it a more gentle deck for tarot reading than the Rider deck, and I love the imagery and the mystery of dragons. Dragons are magical, mystical creatures, and in this deck they are also known for their wisdom and power.

This is a full tarot deck, with 78 cards. It follows the tradition of Rider-Waite with Major and Minor Arcana cards. But, it’s very different at the same time. I would class it as an unique deck.

Let’s Start With the Basics for This Deck

The dragon tarot deck includes reversal meanings for the Major Arcana only. The small white book that comes in the deck pack shows the reversals with their meanings. There is a larger book that can be bought separately that expands on the smaller book, but strangely, it doesn’t include the Major Arcana reversal meanings, I think that’s too bad as they do add to readings. For myself, I own and reference both for readings.

The Minor Arcana doesn’t recognize reversals – you can give any reversals a lesser degree of meaning, but not a complete opposite meaning. I include reversals in my readings, and in keeping with the deck, I give reversals a ‘lesser’ of the upright meaning. I find that works out quite well.

If you compare the card meanings from this dragon deck to the Rider Deck – these are different enough to not truly match up. For me that is one of the attractions to this deck. I wanted a deck that was a bit different without losing the feel and tradition of a tarot deck. This deck fits in with what I do.

The names of the cards themselves are the same as in the Rider deck. You’ll find in the Major Arcana – The Empress, The Magician, The High Priestess etc. – they’re all there and all the same as in other traditional decks. And for the Minor Arcana – 1 through 10 plus the Page, Knight, Queen and King.

There are images on the cards which can be interpreted as symbols to help guide in a reading. Depending on the question asked they can have different meanings which can help to make things clearer. A reader can, of course, choose to interpret those or leave them. It depends on the situation and the energy that comes from the cards, this deck is open enough to let intuition play a big part of any reading.

And of Course, We Have Dragons!

Each of the 78 cards is represented by a dragon. They aren’t there just for the sake of calling this a dragon deck, they are part of the symbolism. Let yourself get caught up in dragon magic and let your imagination and intuition grow and expand. Or just have some fun with it.

You can ask any question with the dragon tarot deck, and use any of the spreads the same way you would if you used the Rider deck.

If you’re looking for a deck that runs with the traditional Rider deck, but is still different, then the dragon tarot deck might be right for you.